To The End of the Earth

Words and Images by Mark Woodland

Smoke filters through the thatched roof and begins its decent down the ridge.  Seemingly in unison, clouds block the tropical sun's intensity and bring the promise of mist and rain.  This weather phenomenon goes largely unnoticed by the Yalis: a post-cannibalistic tribe who live 8,000 feet up the steep slopes of the Snow mountains of New Guinea. 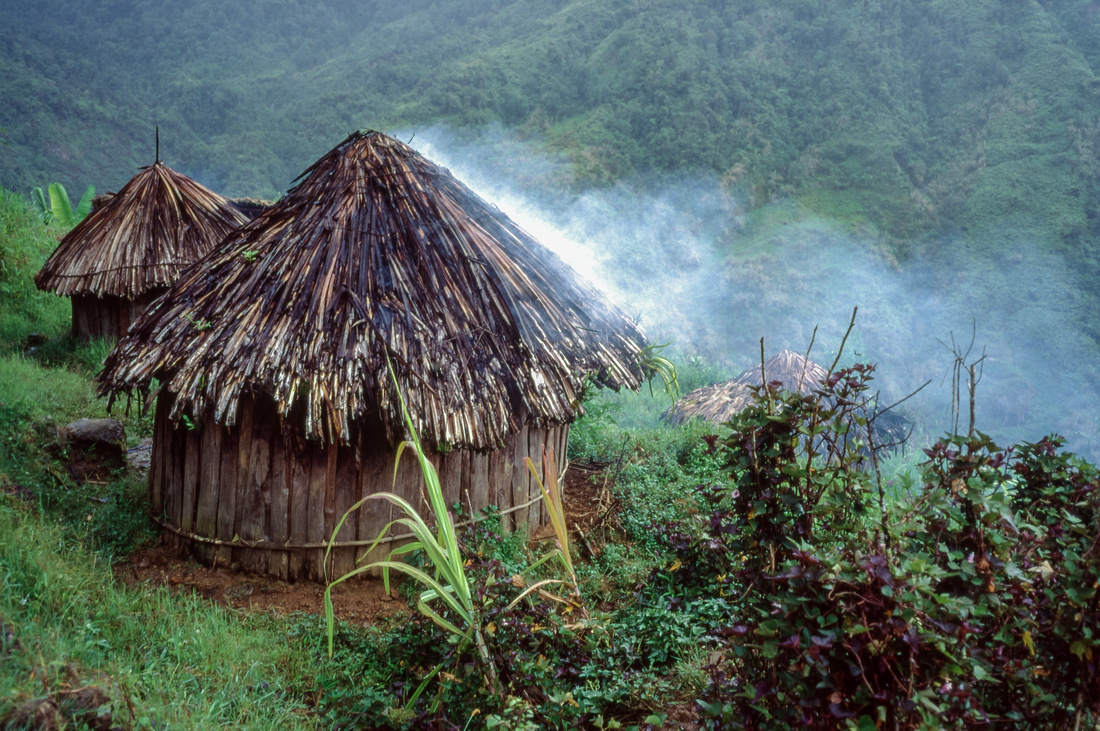 If there are many places left on earth that can still be considered remote, the village of Lolat is high on the list.  It took two flights from Jarkata across the thousands of islands that make up the Indonesian archipelago and we still weren’t close to the village.  It took another plane ride inland from the coast and then a chartered ride by helicopter to bring us to this point.  The view from the air is breathtaking.  We swoop over raging white water between lush green canyon walls and past spectacular waterfalls in a Hughes helicopter.  Our other option for this last leg would have been a three day trek by foot through the mountains, where every step taken is either up or down through rocks and mud.  The pilot keeps an eye on the descending clouds hoping we will make it to the small clearing and land before loosing visibility. 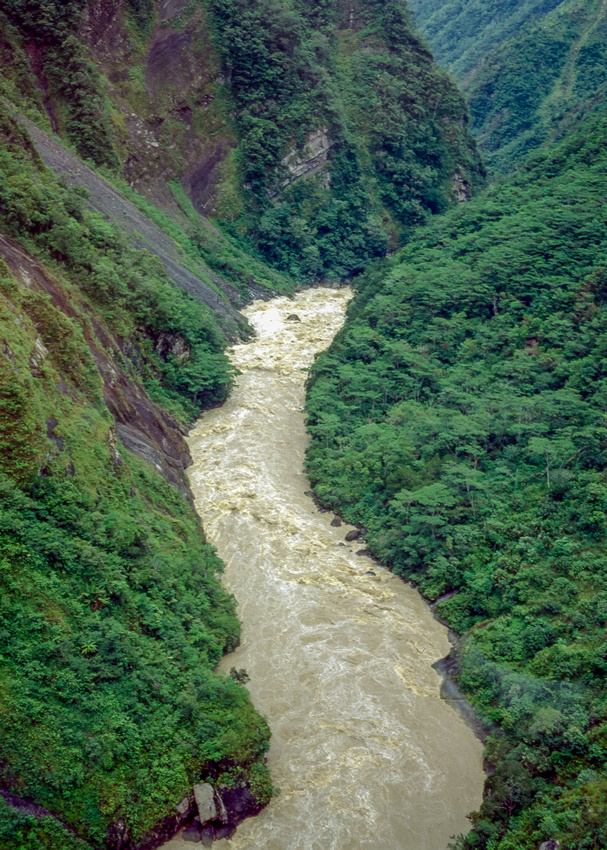 The Hughes is loaded to capacity with our three-man television crew and gear, in an area smaller than the interior of a Volkswagon Beetle.  We were making this trip to produce a special program about the fateful encounter 20 years ago between the Yali tribe and two Australian Christian missionaries, Stan Bruno and Phil Masters.

We are assured the Yalis will be kinder and gentler to visitors today.  Producer Paul Petitte, videographer Mike Pearson and I step off the helicopter into another world.  The present day Yali’s are no longer cannibalistic, but you wouldn't know that by looking at them.  As we clear the blade wash we see two segregated merry-go-rounds of dancers.  On one side the men are yelling and rattling spears. The Yali warriors coat themselves in pig grease, wear feathered headdresses and top it off with bones through their noses.  The thing you can't miss is the pointed gourds that are lashed on and over their genitals.  On the other side the women wear only grass skirts and have painted markings on their bodies.

Our hosts are Art and Carol Clark, Canadian missionaries who had at that time worked with this tribe for over twenty years.  After we do some initial recording, the Clarks pull us away and suggest tea and cookies at their place - tea and cookies!?  Inside we find a comfortable home built in stages from materials flown in by helicopter.  We had passed a school, church and work shed that are the only structures other than the Yalis thatched roofed huts.  Over tea we ask Art and Carol questions.  The most obvious one is: "what's the deal with the gourds?"  Even after all this time they don't have a clear answer - it's just something they do. 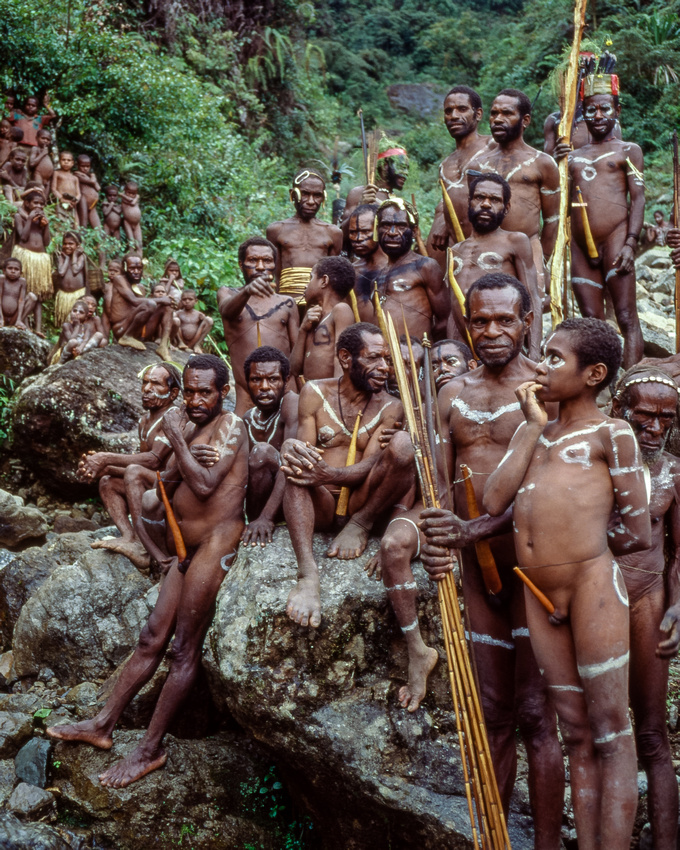 After our break we get right to work re-enacting a raid by another village's war party on men from Lolat working in the fields. Mike took the lead with our production camera.  I was very happy I had brought a small rangefinder for some personal shots.  The inevitable rain catches up with us as we move to a steeply cascading river for the scene where the two missionaries were attacked. Our Yali actors are told to charge down the riverbed that is strewn with large boulders and shoot arrows over the camera. Mike uses an umbrella to keep rain off him and the camera, and thankfully it isn’t needed to deflect any arrows that fly overhead. 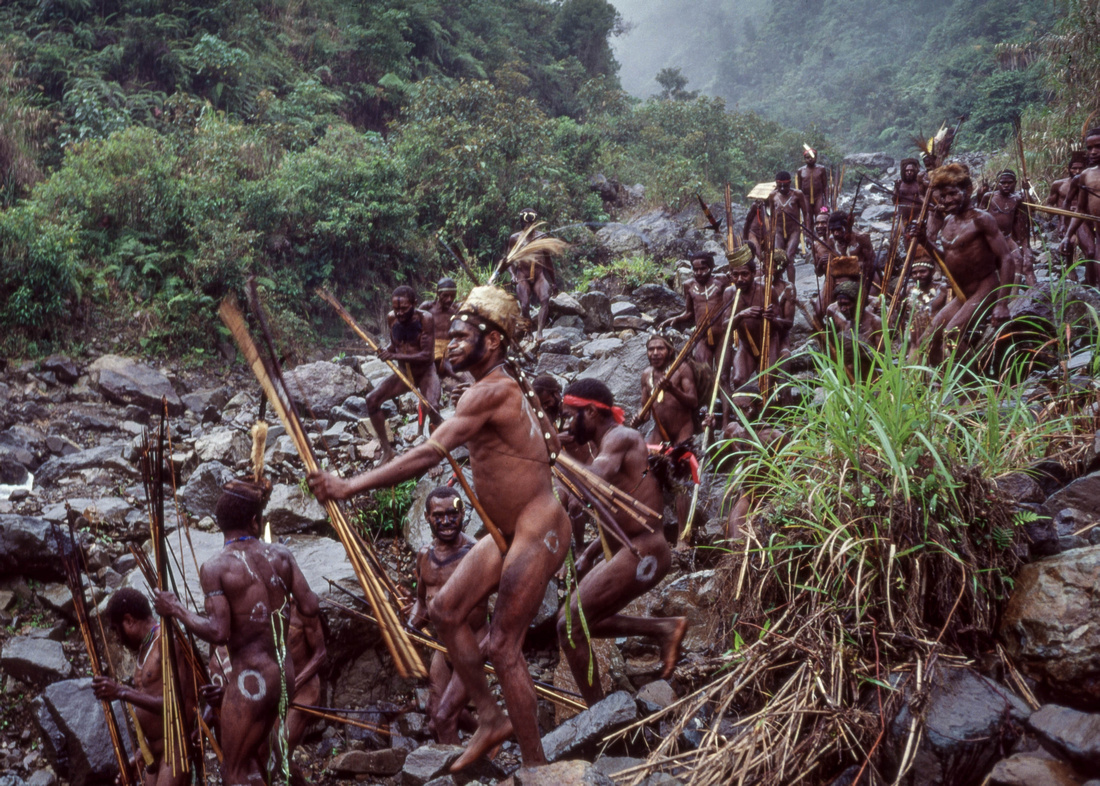 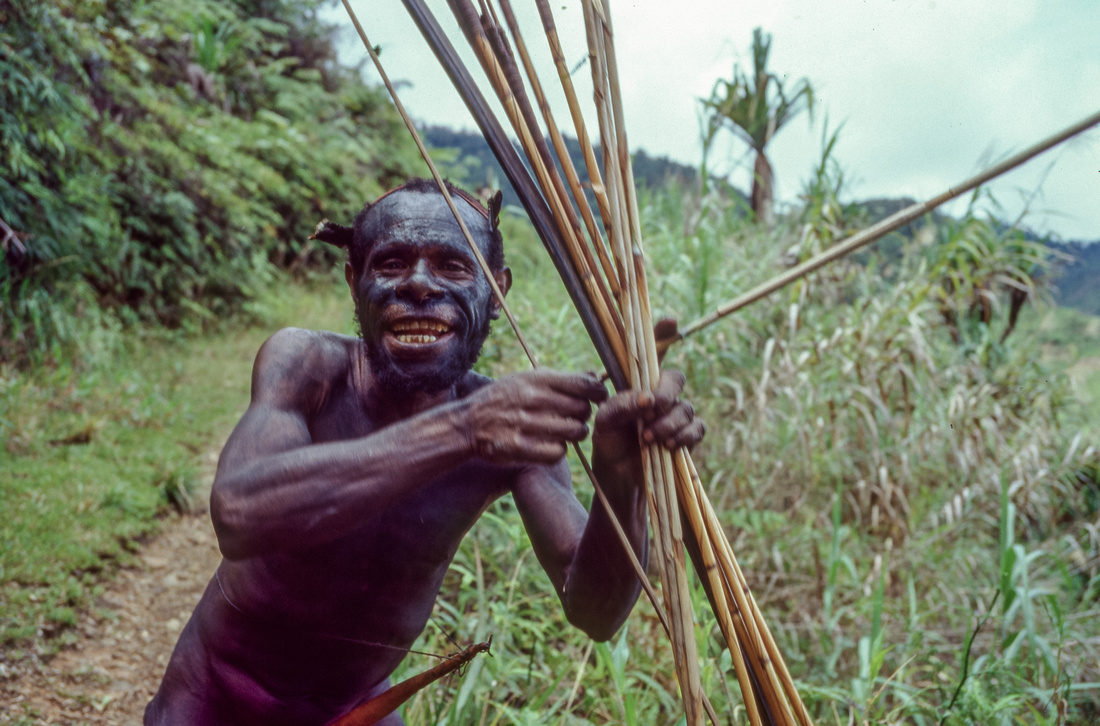 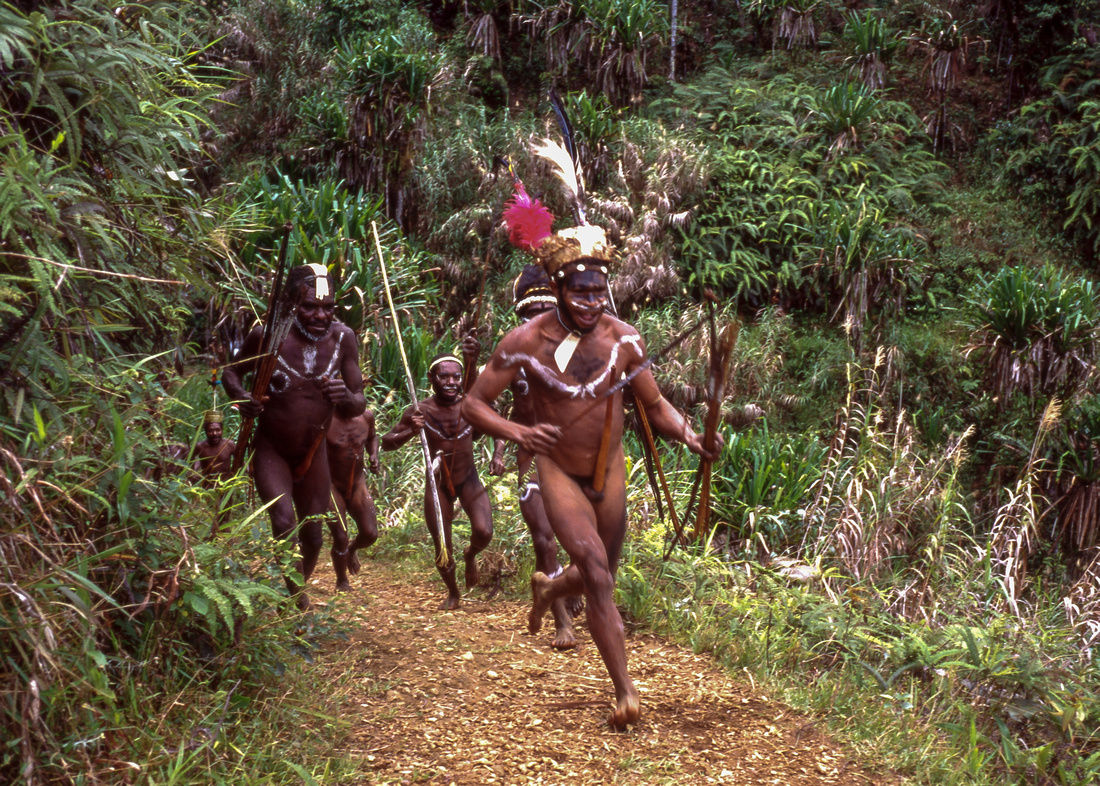 For each scene Paul gives directions to the Clarks, who then translate to one of the Yali for him to relay to the others.  The women line up along the riverbed off-camera and watch impassively with that look most women get on their faces when men are “playing”. 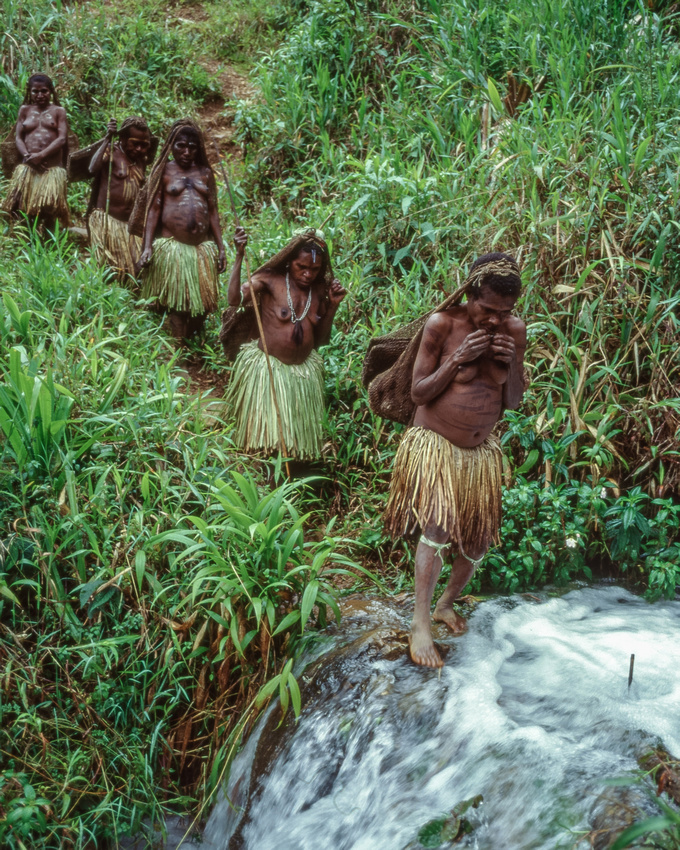 During the down time between takes I help Mike and look up at one point to see a scene that to this day is seared in my memory.  Of the tens of thousands of images in my lifetime as a photographer it is something I still can’t believe happened. A spontaneous group shot of the tribe just standing there as if they are posing just for this shot. 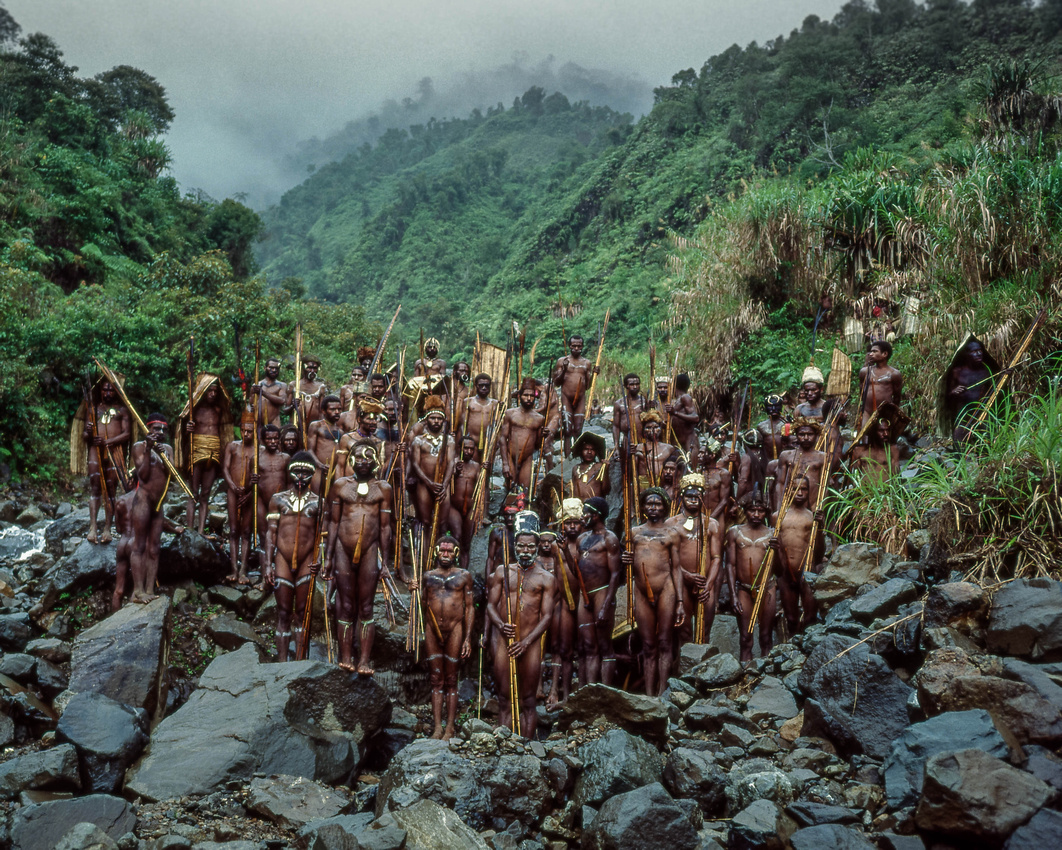 After several takes we call it a wrap and head back to the village.  I watch the warriors literally dance over the rocks with their wide bare feet.  We slowly pick our way over the same rocks at a fraction of the pace.  A couple of smiling boys hover around us and actually point to where we should step.

As fascinating as the Yalis are, it is a relief to take refuge back at the Clarks' house.   While we sit by the fireplace drying off and the grey light fades from the windows, the Clarks tell us stories of life on this remote mountainside.  Art and Carol's two boys loved life in the village during their summer breaks from school.  They hunted in the rain forest with the Yalis, and sometimes played practical jokes on them, like setting off firecrackers and scaring the tribe half to death. 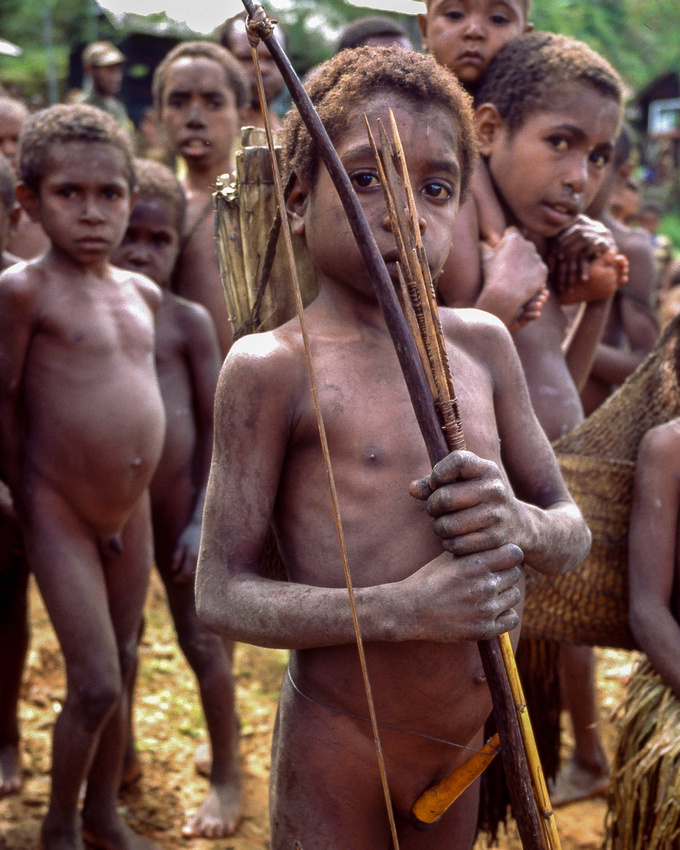 Other journalists and photographers have visited over the years.  Before our second day of taping begins, Art tells us the story of something that happened to a television crew from Italy.  The Italians gave their Yali "actors" a few lira after the first film set-up, thinking it would be a nice gesture.  The Yali mostly barter in pigs but began wanting money each time they did something for the TV crew.  After a few days the Italians started running out of lira and the Yali began using threats and intimidation when they didn't get "paid".  They even blocked access to the helicopter when it came to pick them up.  The pilot had to force a way through for his passengers. 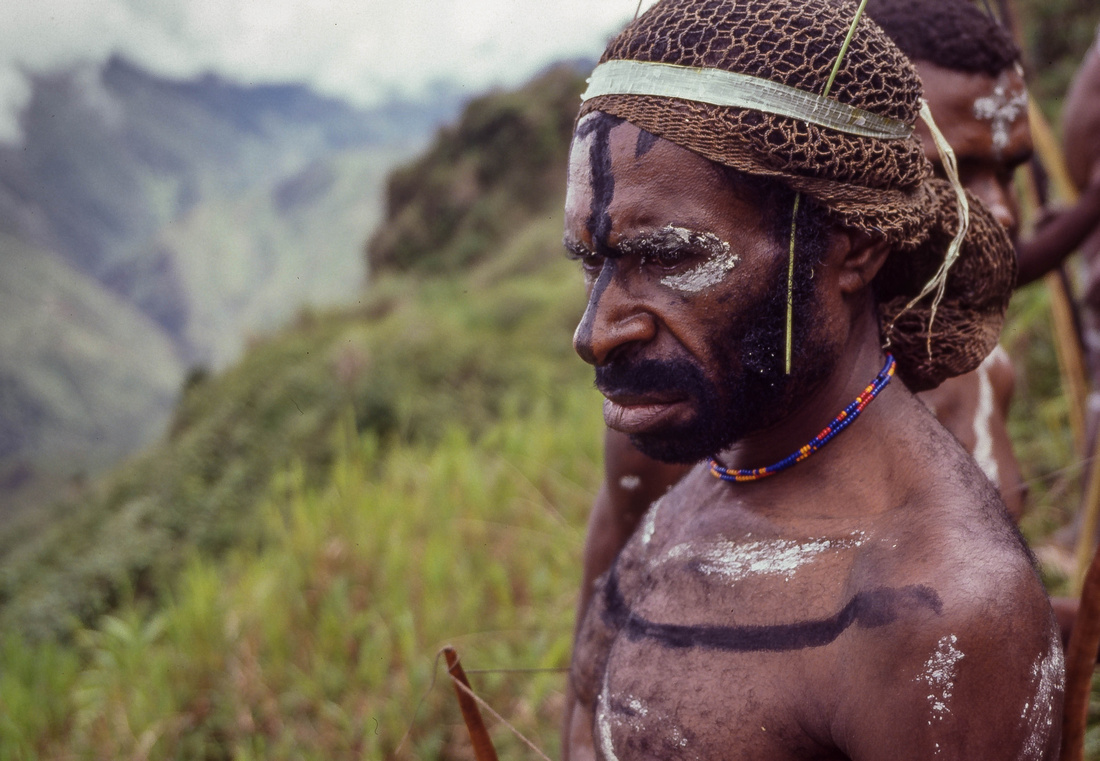 In an effort to avoid this from happening again, Art arranged for our “actors” to receive an agreed-upon daily wage for their work.  Midway through our second day we are ready to shoot the scene of a pig roast.  Paul agrees to buy the pig which is expected by the villagers.  It is carried squirming and bleating by its front and hind legs and held on the ground.  A warrior then shoots an arrow into the pig's heart from a few feet away.  It takes several more arrows before the squealing and squirming stop.  It is then dressed and placed into a pit which is lined with hot coals. A layer of wet leaves and soil cover it to hold in the heat.  After it roasts for a few hours Paul gets the first taste as the meals' sponsor.  The rest of the village follows, getting their portions passed to them in what is apparently an important pecking order.  The mood seems light as it once again begins to drizzle.

When the picnic is over we see Carol with some of the Yali men engaged in an intense discussion.  She calls Paul over and says the men have words for him which he assumes means they are thanking him for the meal.  Carol reluctantly explains that some of the men have decided they want to be paid more money or they will quit.  Carol is clearly embarrassed, and scolds like a mother whose children won’t share with other kids.  But these “boys”  begin making a statement by gripping handfuls of arrows and hitting the shafts against their bows. 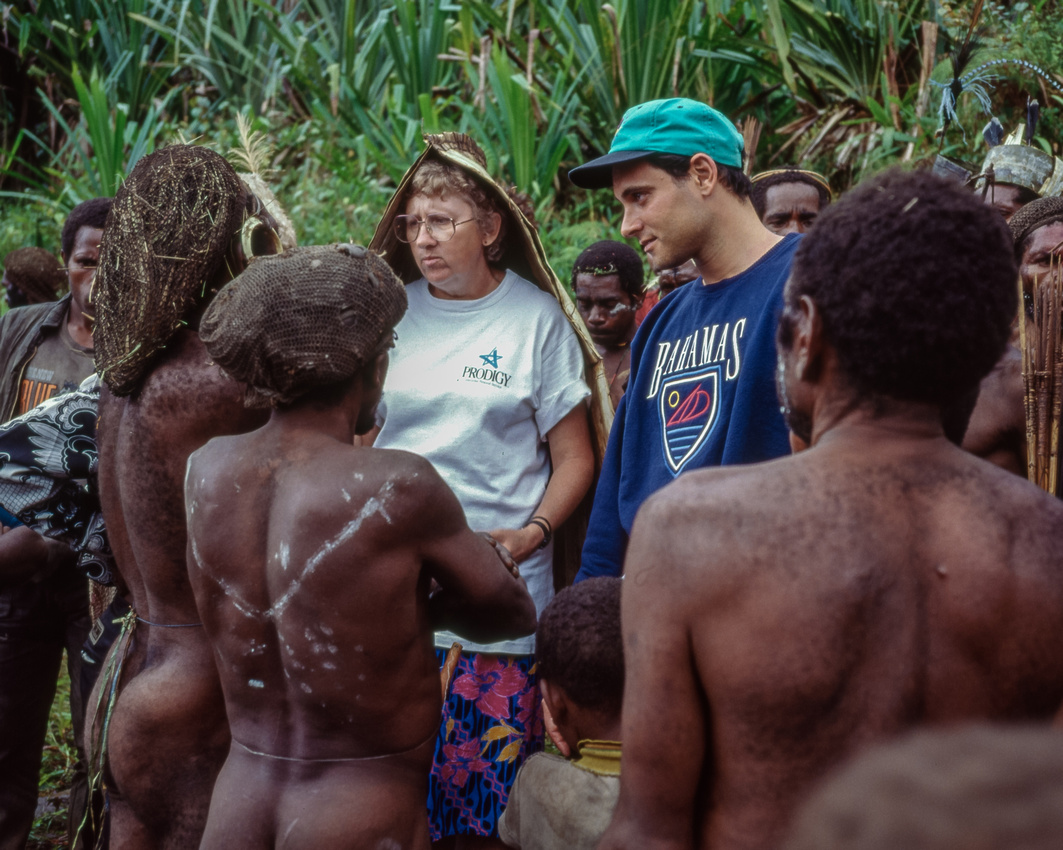 We work our way down the steep muddy trail back to the house.  Paul soon joins us, leaving Carol to negotiate. The warriors get louder and you couldn't help but wonder just how much of a handle the Clarks really have on things.  Carol returns and tries to reassure us.   Later that day we try to capture a ritual where the boys get their gourds.  It is difficult to stage because the older Yalis who know how it is done have gone on strike.  As it is getting dark we do a bonfire scene to represent the Yali burning their fetishes.  It was this burning of their fetishes that likely was the last straw that led to Phil and Stan's martyrdom. I sense that the “striking” warriors are watching from the shadows as we re-enact this particular scene.  That, coupled with the earlier intimidation sparks my imagination about potential worst-case scenarios.  I keep thinking of that poor squealing pig being shot with arrows...

The next morning with the tropical sun burning bright, the dark thoughts of the night before are gone.  We were scheduled all along to fly out to another village for a few hours.  The men who had gone on strike show up for work as usual, and when they find out we are leaving they become concerned that we are angry with them.  Carol decides to give them the impression that because they went on strike, we are going to another village to film.  When we return the Yalis are anxious to get back to work without any more fuss. 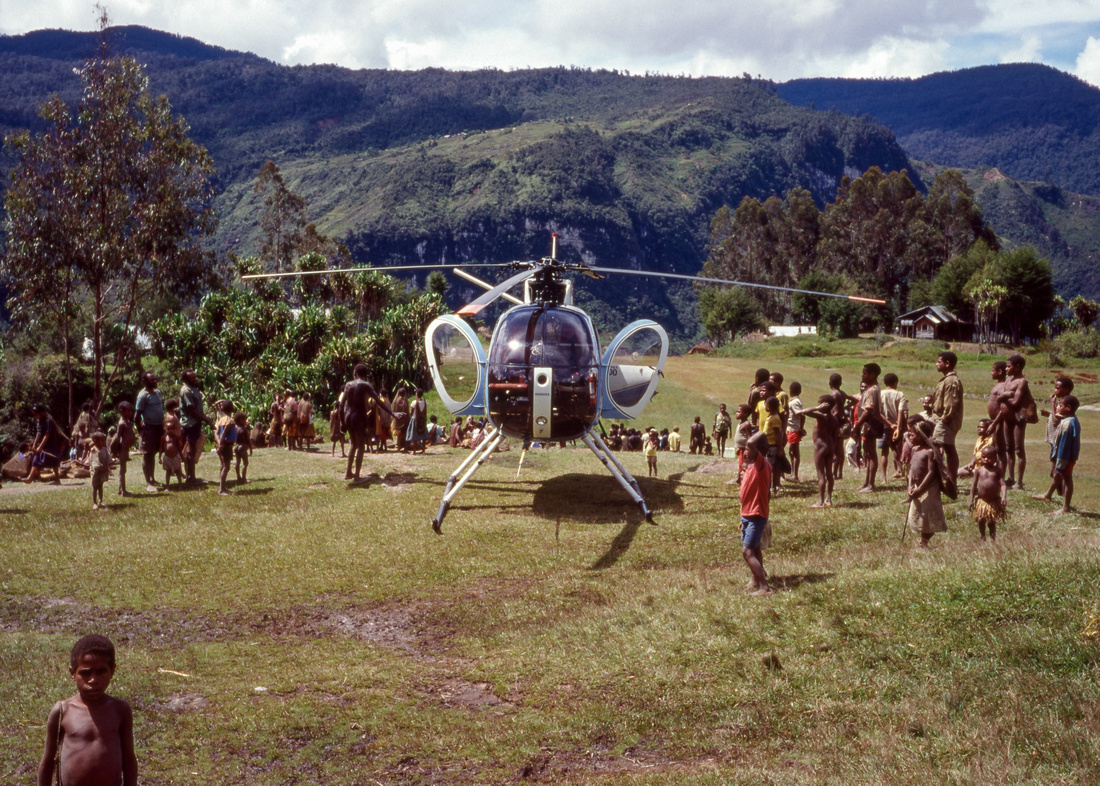 There is one final location left to capture for our story.  It is too remote to reach on foot in the time we have left.  In order to save on fuel I go alone with our pilot, Len.  The helicopter lifts off the ground and pivots away from the village.  It then leans forward and we rush headlong over the edge of the several thousand foot precipice.  The door is off for unobstructed filming and as we bank to the right I get a spectacular view of the valley below.  I keep a tight grip on the camera and brace against the wind to maintain a steady shot.

We follow a beautiful mountain stream that meanders down from the snow-covered mountain peaks and soon find the place where two beaches face each other at a bend in the river.  This is our landmark and it was here that the final confrontation was to have taken place. There is no place to land in the rugged terrain, but Len manages to put one skid down on a large log crossing the narrow beach and hovers.  I record the now placid scene, and on my cue he gently lifts off giving the camera an impressive crane shot.

Later I learn more details of Phil and Stan’s last moments on the beach.  Once hunted down, Stan was repeatedly shot with arrows.  He would pull them out and break them in half until he finally died.  Phil was next and also shared the same fate.  Eyewitnesses that were part of the attempted rescue party said there were hundreds of broken arrows littering the site.  Apparently they were not eaten for fear of ingesting their evil spirits. Also, in order to keep their spirits from returning to their bodies they were hacked into pieces and scattered across the mountainside.  To learn more about these men and what follows you can read “Lords of the Earth”, by Don Richardson.

This was literally the trip of a lifetime.  For a kid who dreamed of being a photographer for National Geographic, I was in heaven.  The camera I used was a Nikon 35TI and I shot with Kodachrome 64 film.  One side note is later on the same trip we went snorkeling and diving down on the coast.  At one point, too many divers with tanks sit on one side of the boat and it flips over.  Thankfully the camera and film were in a tupperware case and stayed dry and didn't sink.  Now that makes me want to have a tupperware party! 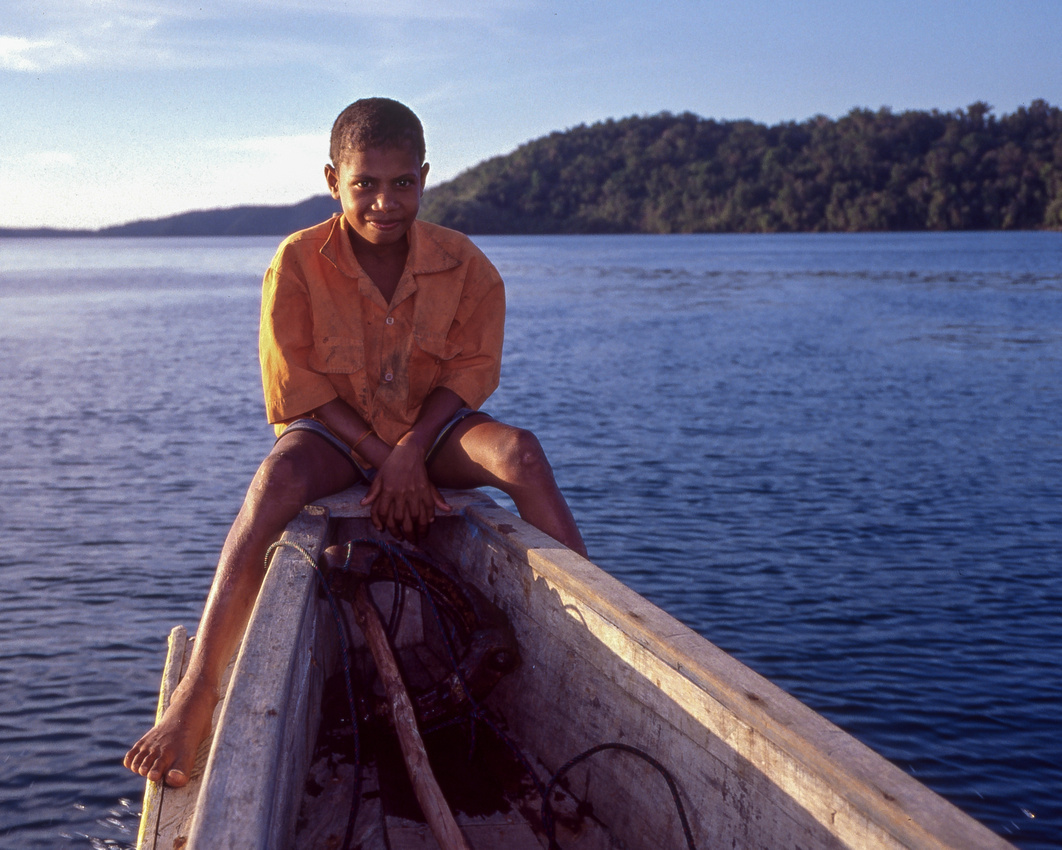